Posted in Music to design to

There are some tracks that I seem to be able to listen to while designing that never get old. Of course it depends on my mood but for the most part the tracks listed below could easily be put on repeat and I would never get tired of them - well I haven't yet at least.

A sneak peak at the Element Joomla Template

Work is progressing nicely on our June Joomla template release and while it is still a few days off launch I thought I would take some time out from coding it to show you what we have in store. The Element template is a colourful building block type design that will feature some subtle patterns fused with bold colours to create a versatile and flexible Joomla template for you to use in pretty much any situation.

You can see the full screenshot of the work in progress after the link. At this stage I'm hoping to have the Joomla 1.5 and Joomla 1.6 template ready for download early next week which should bring us back closer to our desired release timeline for our monthly template releases.

As promised yesterday, here is the next Joomla template from our back catalogue to be ported to Joomla 1.6. Newstream was released back in July 2010 and is an elegant magazine or media portal that has been used by Joomlabamboo club members for sites as diverse as traditional news portals, real estate sites, travel directory and even a food website.

You can check out the original demo of the Newstream template on our template showcase or club members can head straight to the download area and grab a copy.

Please note that two extensions featured on the demo - CaptifyContent and the JB BB Code plugin (For the twoline menu items) are yet to be ported to 1.6 but we hope they will be available in the next few days.

As a reminder you can check the status of any template by checking out the Version information page on the Joomlabamboo Knowledgebase and also follow JB Activity on twitter to keep apprised of all Joomla template and extension releases.

RedShop is a relative new comer on the Joomla ecommerce scene but it's offerings are genuinely impressive. I had some direct contact with redShop when we built the Shop Ignition Joomla template back in March and I really liked what I saw.

The scale of the extension is incredible and the templating system has a good balance between separating the design from the code, which makes theming the shop a pleasure for the non coder.

The following interview with Ronni from Redcomponent has been on the back burner for a little longer than I would have liked but I hope you will agree that it makes for some good reading.

Club members can download the template from here or if you need a refresh of what Simpleshop looks like check out the Simpleshop demo.

After finally getting our May Joomla template out the door last week, it's time for us to put our heads down and start focussing more on porting some of the Joomla templates from our back catalogue across to Joomla 1.6.

By far one of our most popular themes over the years has been Avanti and so I am very happy to announce that it is now available as a Joomla 1.6 Template and quickstart package.

The next templates to be ported across to Joomla 1.6 will be Simple Shop - without Tienda and Virtuemart support, Ecolift, Newstream, Cultivate and Powerplay. Eventually all of our Zen Grid framework based templates will make the leap so if the theme you need ported isn't on the list hold tight - or bug us in the comments to move your template up the list. 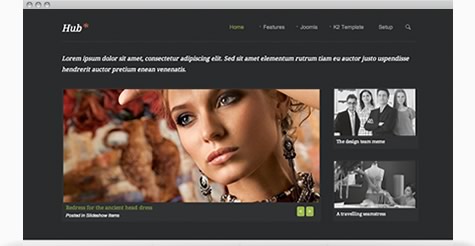 I had hoped to start this blog post with the news of the release of version2 of the Zen Grid Framework but alas that is not the case. Yesterday I released the Joomla 1.5 version of the Hub Joomla template (Joomla 1.6 version coming later today) which as you can see is a striking magazine styled template that comes with some beautiful large date formatting in the Joomla content as well as the k2 Joomla template that ships with the template.

Before I go on - you can check Hub's features, live preview, documentation or download options in the usual spots.

So why did we release the May template in June?

For those that don't know we follow a schedule of monthly Joomla template releases, that usually means we release a template within the month that the template is designed for. Hub is the first template that missed the targeted release month.

There are a few reasons why this happened but the main reason was that we were slightly over ambitious in what we wanted to do with the next incarnation of the Zen Grid Framework - our Joomla template framework. So it got to the point a few days ago, where we realised that while we had a killer Beta of version 2, it wasn't really stable enough for production. This lead us to the big decision to keep working on v2 and release Hub on v1.1 of the framework.

Just a small but important update for the JB LIbrary plugin released today.

This is just a quick note to let you know that the Joomla 1.6 template version of our April release - Pure is now available. Club members can download Pure from the Pure download page and if you haven't checked Pure out yet you can see it in action on the Joomlabamboo site showcase.

The new fonts are: Swanky and Moo Moo, Over the Rainbow, Wallpoet, Damion Aclonica, News Cycle. Google has yet again bundled some quality fonts into the font directory. Members can grab the new version of the framework from the Zen Grid Framework download page.

The Zen Default template is the starting point for our monthly template releases and is ideal for developers and designers who want to get a feel for how the framework operates and start working with a bare bones theme. A quickstart package will be available tomorrow and I will also put up the demo of the Zen Default once that has been finalised as well.

I'm hoping in the next few weeks to flesh out the starter theme catalogue some more with some blank-ish themes that are geared towards a blog, news portal, business, magazine and perhaps even a shop design - but I'll post some more on that later.

To download the framework or the starter theme club members can head on over to the Zen Grid Framework download page and start playing with the latest incarnation of the framework.