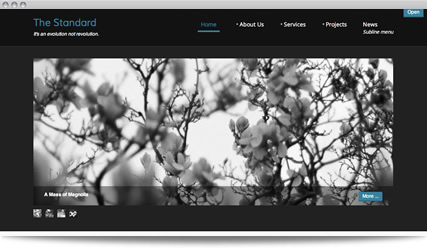 I'm happy to announce that the Standard Joomla template is now available in a Joomla 3 compatible version.

If you recall the initial release of Standard back in September 2012, it was released as a part of our Zen Building Blocks collection. The Zen Building blocks were released as a pack of responsive starter Joomla templates that aimed to cover a wide variety of common layout types.

The updated theme has some awesome control over colours using Theme Magic. I wrote about the possibilities of using Theme Magic a little earlier today and I think that when you take a look at the Theme Magic options available in this new release of Standard, I'm pretty sure you will agree that this is an incredible customisation tool.

As per all of our T3 based themes it comes with support for LESS, is built using bootstrap and has the same responsive layout control as our other recent Joomla 3 template releases.

If so then we need to hear from you.

As a part of our committment to making these Joomla templates backwards compatible with previous Zen Grid Framework releases, we have developed a legacy system which theoretically should allow you to drop your current custom.css file into the new template. There are a few unknown factors in the mix, so we would be eternally grateful if you are using a previous version of this theme if you could get in touch.

The new version of the theme does not yet have this implemented and we will be releasing an update as soon as we have been able to test a few custom versions that are out there in the wild.

Now that we have the first of our backported themes out of the way, the next few will come quite quickly. The remaining Zen Building Block themes are up next and then we will step through the other themes in the following way:

- Most popular Joomla 2.5 themes first - eg Corporate, Lifestyle, Ascent, Colourshift. (Think another theme should be in this list - then let us know in the comments).

****You can download the Joomla 3 version of the Standard template on the Standard download page. We currently have a Joomla 3 quickstart available for Standard and will be uploading a Joomla 2.5 version very shortly.