Earlier this week I released the Responsive Joomla template which is the first our club templates to be released on Zen Grid Framework version 2. The new update is a considerable update and while I port the existing framework templates across to the new version I thought I would post some of the new features and improvements here.

This is a big one for us and hopefully for you too. From now on we will be releasing single packages of both Joomla templates and the framework plugin. This means that the packages will install on both Joomla 1.5 and Joomla 1.7. This will make managing versions and releasing updates a lot easier which means it will be easier for our users to keep track of versions and updates as well.

The framework is now a plugin

Most of the work that the framework does is out of the way of the template itself so it made sense to move the framework files out of the template folder and into the plugin manager. This also means that we can tether alot of the functions that we were relying on JB Library to do and do that from the within the template admin itself. The end result is that the template holds all the power and you no longer have to go hunting around the plugin manager to find out how to do something. Nor do you need the JB Library plugin installed on your site.

A new interface for the admin

I posted some screenshots of the new interface some time ago. The interface is a lot prettier now and has some nifty stuff like built in documentation. The menu items have been shifted around a bit as well, which makes it easier to find things faster. 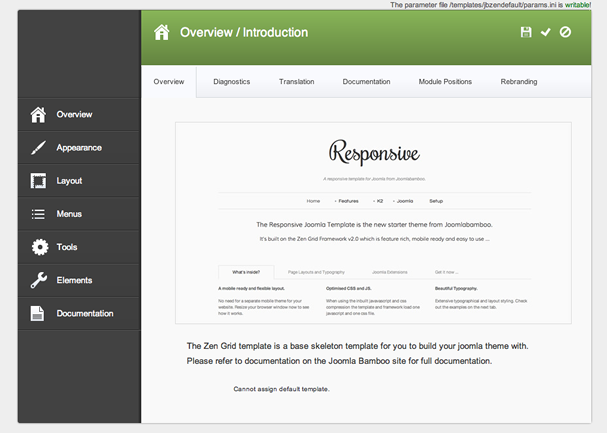 Caching and compression of core and extension files

Another big improvement is the way that we handle the caching and compression of css and javascipt files. It is entirely possible now to switch the caching on and only have the template and framework create one javascript and one css file.

You can also throw the core Joomla and K2 css and javascript into the compression as well, so theoretically you can run your Joomla site with only one http request each for css and javascript. This implementation is pretty flexible so it wont mess with other extensions and you can prevent the framework from loading the jQuery library loading on the page if its already been loaded.

The new compressor also loads any relevant css or javascript that the Joomlabamboo extensions may need, which again cuts down on http requests which means your site will load a lot faster.

There is now a lot of flexibility in the framework when it comes to rendering layouts. The markup centers on a reusable, source ordered, percentage grid which makes it possible to use the following layout types:

There are no longer any fixed inline css statements and since the widths are class based it means that you can render the grids in your content as well.

One of the big requests we have had in the last few months is for the user to have more control over the font stacks. The custom font stack option make it easy for you to target specific markup on the page with your choice of fonts.

The css overrides have been transformed into an intuitive interface that uses the a colour wheel to make choosing colours easy. Select the selector, select the attribute and then choose your colour via either entering the hex value in a field or by using one of those fancy colour wheels.

ACL for the admin

The framework v2 also offers the ability for you to hide any of the menu items in the template admin. How often have you had a client get 'creative' with template settings and undermine the hours of work you put in to getting the template perfect?

A new icon for the framework

This is more of a cosmetic feature but the Zen Grid Framework now has a new icon. I really loved the old bamboo grid icon however I think the new leaf like fan created by Graham Smith is a better match for Joomlabamboo. Even though I asked Graham to design this logo a few years ago for another project (that didn't quite leave the ground) I think it fits the bill.

At the moment the Responsive template is the only template available on the new framework so as you would expect we are working on moving the current framework templates across to v2.0.

In doing this we also need to update our K2 templates to work with K2 v2.5 and Joomla 1.7 but before we do that we also need to make sure that the current Joomlabamboo extensions that use k2 are updated as well. So you can expect a release of our K2 compatible extensions in the next few days.

Beyond that I also have in the works a new module which will feature a responsive slideshow as well as some other galleries that will fit perfectly into the new mobile capable templates. But you will have to hold fire on that release until we get the other updates out of the way.