It's more than a year since we last dropped a new design on the main Joomlabamboo site and while i had planned to do this a few weeks from now I caught the realign bug and so have spent the last few days implementing the new design as well as some new content.

Last time we rebooted it took considerably longer than three days as we were shifting from Joomla 1.0 to Joomla 1.5 but it's amazing what you can learn in a year from building templates. The design itself has sort of been on the back burner - just simmering away and getting looked at every few weeks - until last week when I finally got some inspiration I felt I could act on.

One of the main things I wanted to do was to reign in a lot of the odd styles that existed between our various support areas. The beauty of Joomla is that you can do a lot with 3rd party extensions in terms of functionality but if you aren't careful you can lose the design cohesion that all in one solutions. So for me the solution was to effectively have two template designs and divide them on the site between "product display" and "customer support".

This means that the frontpage, joomla template and Joomla extension pages get the full width more open design while the support areas - ticket system, downloads, knowledgebase etc - get the two column design - basically the one you see on this page here. I think this helps to create cohesion and balance between the various support areas and allows us to make use of side column menus which were either missing or not implemented well on the previous iteration of the site. Ill be adding more to the sidebar shortly ... 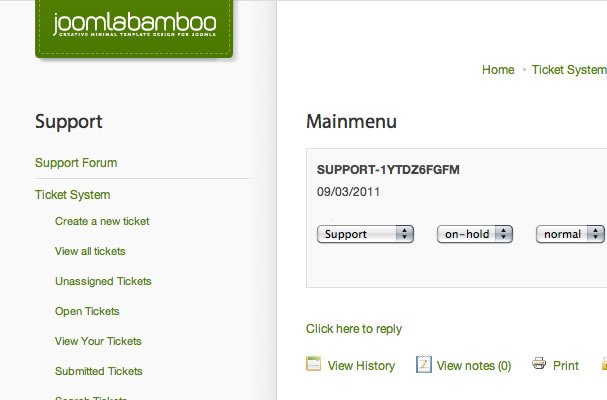 I've also dropped the hidden panel links which were not especially intuitively placed and condensed the links found there into the main and sub nav menus at the top of the page so the main areas of the site should be available within a single click. The performance of the site should have improved also given that I culled some extranaeous plugins that were chewing through some of the server memory and the fact that the new template is running on the latets version of the Zen Grid Framework.

One of the big changes is that I have shifted the login and the the user profile / avatar into the top menu itself. In the past it was hidden behind a static member login panel which only gave the user information on whether they were logged in if they clicked the button. Im still fine tuning the aspects of this feature but I think it's working well for now.

I have also simplified and made the main template images a lot bigger. This way when you visit the main Joomla template page you get a better sense of the character of each template whereas in the past the thumbnail images looked swanky but didnt necessarily give you a great indication of what the theme had to offer.

There are still a few kinks to be worked out, plus some extra functionality Im planning on implementing in the next few weeks - so in the meantime please bear with us while we work our way through them and let us know what you think of our new digs. Thanks to all those who tweeted and retweeted yesterday - great to have that feedback from JB users and the wider community.